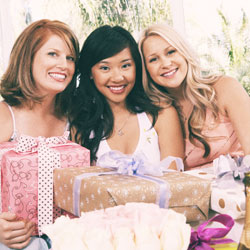 The bridal shower is where the bride’s closest girl friends and female family members get to pamper her as the guest of honor and make her feel as wonderful as the woman they know she is. They are there to offset her fears, stress and worries about herself, the day and the forthcoming major change in her life. A good bridal shower should also create some fun memories to deepen the friendships and anticipation of the big day. Here are some tips to help you strike just the right note for the...


Bridal showers usually take place anytime between six months to a week prior to the wedding. They are not hosted by family members but rather close friends of the bride. Usually, the lead organizer is the Maid of Honor. The etiquette, while less formal than the wedding, still dictates that men won't be present - unless it is a ‘couple shower’. The invitations are usually more informal, send out by mail, phone or email. It is just for close female friends of the bride although close female relatives on both the groom and bride’s side may be invited (although not expected to gift).

The bridal shower is a time to share stories, eat great food and pay specific attention to the bride-to-be. If the bridal shower is very casual and informal, the Maid of Honor usually both hosts and finances it. If it is a bit more elaborate, she may ask other bridesmaids to contribute to help share the burden of the cost. Either way, she will certainly enlist them to help with set up, planning and decorating. It can take place at home or any location where you would like to throw a party. It may be a lunch or dinner date or a Spa Day.

If many of the bride’s friends would have to travel thousands of miles for it, it makes sense to have it closer to the wedding so they only have to make one trip. On the other hand, holding a bridal shower several months prior has the benefits of ramping up the anticipation while not having the bride stress out at yet another event so close to her wedding.

Before planning a bridal shower, however, it is important to check with the bride first as some brides don't like the extra attention or to be asking their friends for yet more gifts. It is also worth checking that nobody is invited to the bridal shower who has not been put on the bride and groom’s guestlist.

At the bridal shower, folk are generally just eating, laughing, talking, telling stories and opening presents. There may be some fun bridal games but it is a sweeter affair than the bachelorette party and is about preparing the bride for her new role.

Bridal shower etiquette does not specify what to give; it could be homemade or a family heirloom or a collage built up from your own memories. But what is important is that you do bring a gift. Let your own judgment, finances and relationship with the bride help you decide. If you have been invited to the bridal shower, you certainly should be giving a bridal shower gift and a wedding gift (chosen from the registry). The Maid of Honor should take notes of who gave what and each of the people who attended the bridal shower should be formally thanked with a note.

Gifts for a couple shower could be based around shared registry items like cooking knives, Le Creuset pans or a fondue set but a bridal shower should be distinctly girly. A group of you could club together with your finds to gift something truly useful/meaningful for the bride. And don't forget to wrap it up nicely! The whole point of the bridal shower is to make the bride-to-be feel loved, special and supported. The small details and tiny thoughtful touches are everything - it does not need to be lavish in any way apart from the love!