The magnificent Edwards mansion was built on Cajon St in Redlands, California in 1890. Ready-made plans were purchased by Mr. James S. Edwards, pioneer citizen and citrus grower, to build the fourteen room house. It took over one year to build the original salmon pink structure.

This prominent landmark on the Redlands landscape for many years was situated on a slight rise of ground from which one could see in all directions over the twenty acres of young orange trees surrounding it. The house was not at first used as a family home but was a boarding house for several years.

At a later date, J. S. Edwards and his family took up residence in the great Victorian relic. It was occupied by the Edwards family from that time on until the death of Mrs. Edwards in 1958. In 1967, Plymouth Village acquired the house and used it for office headquarters for six years. In 1973, the developers of the Edwards Mansion complex viewed the house as a classic exhibit of Victorian architecture and felt that it should be restored. The Mansion was purchased for the sum of one dollar,cut into two sections, moved five miles through Redlands and relocated on the site of the old Barton Ranch, one of the most fertile and picturesque of all the old California estates.

Adjacent to the mansion stands the Orange Tree Wedding Chapel. The stained glass windows and pews incorporated into this structure were once part of the first Evangelical Lutheran Church built in Redlands on Olive Avenue in 1904. The chapel holds one hundred and ten guests and 140 with some standing. The Greenhouse and heated Orangery patio, Tea Garden and Pavilions are used extensively for wedding receptions and banquets.

This development is offered as a tribute to J. S. Edwards and the pioneer citizens and citrus growers whose courage and vision have left with us today a rich heritage of culture and industry. 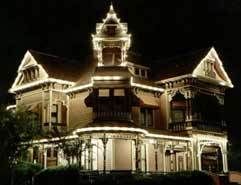