I just want to look back at one of the tackiest wrestlings, I mean weddings, in “celebrity” history. Just when you thought Hulk Hogan of VH1's Hogan Knows Best actually did know best, little toe-head Brooke got engaged to wrestler Bully Ray - despite her father's negative feelings towards him. I wonder if Bully “bullied” her into it - Ha! I crack myself up. 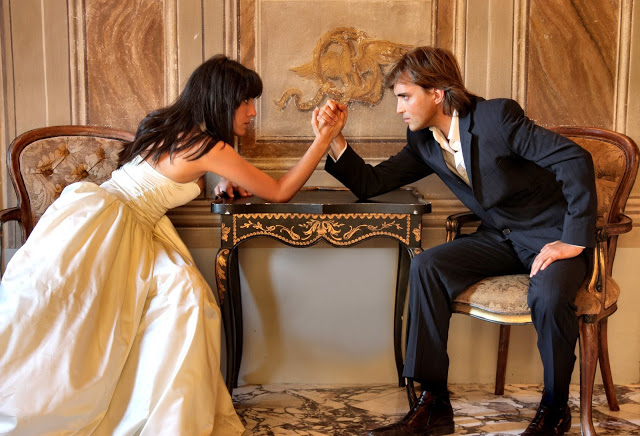 Anyway, how did this dynamic-duo come to be? Well, Bully decided to put a ring on it in the ring, and you’ll never guess where they held the oh-so-unstaged ceremony - you got it, in the ring. I didn’t think Brooke could out-tacky her Ed Hardy rhinestone’d closet that seemed to be stuck in the year 2000- but alas, she did.

Not only did her bridesmaids look like they were attending a high school prom that 2007 threw up all over, but their wedding was being announced like a friggin’ wrestling match! Come on now - we GET IT - you wrestle! Aside from her orange spray-tanned skin and overly bleached-blonde hair that looked as it was clipped back as she was running to the aisle, it seemed as though Brooke had her makeup done by a 5th grader- glitter galore.

It doesn’t stop there. After the painfully scripted vows were exchanged, their “I Do’s” were then interrupted by one of Bully’s best men, who proceeded to strip down to his patches - resulting in an invasion and attack of the Aces & Eights Nomads. Everyone ended up on the floor; Brooke’s groom got knocked the f*ck out, and her daddy Mr. Hulk Hogan was laid out on the mat. It was definitely the most entertaining episode of their failed reality show to date.

So much for “Hogan Knows Best.” The real curiosity this wedding made me wonder was whether or not the people in the audience paid the price of a wrestling ticket to witness these nuptials? Like, did they find their wedding invites on Ticketmaster or Stubhub? The world (you and I) might never know.

Have a tacky wedding story? Let us know in the comments!
Leave a comment...
Search Blogs
Archive
2018 (15)
August (4)
What does my Maid of Honor Actually Do?
TOP 3 HONEYMOONS HOTSPOTS!
Band or DJ?
Bizarre International Traditions
July (5)
Do I HAVE to wear white?!
The Great Outdoors
Wedding Traditions & the Shocking History Behind Them
YOUR DAY YOUR WAY
Diffusing the In-Law Stigma!
June (3)
A Wineful Wedding Shower
Would you hire a psychic for a wedding or wedding shower?
It's feeling a lot like summer. Like the idea of Pool Party but don't like the EXTREME Pool Parties that aren't kid friendly?
May (2)
A White Wedding; with a touch of red & blue.
Achieving a Royal Wedding Dress
March (1)
When Your Fiancé Becomes Your Brother
2017 (17)
October (1)
What NOT to forget for your Big Wedding Night!
August (1)
Prepping An Autumn Affair
July (2)
Heartfelt Letters
Save a Few Bucks
June (2)
An Arctic Honeymoon
Slackin' on the RSVP
May (3)
Pippa, Please.
Are you the Superstitious Bride?
Cinco De Wedding
April (3)
It's been a Long Time 'Cumming'...
What Would Make You Call Off a Wedding?
Proposing One More Time
March (2)
Interracial Relationships
Favorite Proposals
February (1)
Cake and Wallpaper?
January (2)
Under-Bloomed; Over-Budget.
Saving the Date: or Rather, Picking One.
2016 (47)
October (5)
Disney Movie Love Reading
MASH Nostalgia
Color Coordination
When Friends Fall in Love
Halloween Inspired Wedding Gowns
September (1)
Brangelina Split!
August (5)
Funny Wedding Invitations
Weirder Weddings
Sheer Comes The Bride
Gluten-Free Alchy
Falling Out of Love?
July (8)
Our Top 5 Celebrity Wedding Dress Fails
Where would you like your Arses?
Now That's Some "Fly" Wedding Photography
How about Polyexclusivity?
Bridal Shoe Strategy!
The Engaged Rosie Huntington-Whiteley & Jason Statham
Cheers to That, Britain!
The Lover's Checklist
June (17)
NEWBIE ALERT: Welcome to the Wedding Videography Industry!
What type of husband are you?
Kim K. Rap Sheet
Advice for Anonymous
Why can't I find THE ONE?!
What Type of Wife are you?
Summer Wedding Favor Ideas
Wedding Planning with iMessage
Slaying a Twofer
Dapper Dan's Do's & Don'ts
Non-Traditional Wedding Cakes
Trash the Dress
Today's Celebrity Hair & Makeup Faves
Brides take to Bleaching & We're NOT talking about their Teeth.
Memoirs of Wedding Horror
"Briding" on a Budget
When Celebrities - I Do - it Humbly
May (4)
DRESSESSARY or Nah?
2016 Top 5 Wedding Themes
We're Just Ordinary People
Patiently Waiting
April (1)
5 Day-Of Wedding Disasters And How To Deal
March (2)
Dance With My Father Again
Let's Get Naked
February (1)
An Ode To The Spray Tan
January (3)
Different Strokes For Different Folks
The Year Of The Boho
Engagement Season Drinking Game
2015 (36)
December (3)
The Marriage Is Strong With This One
Grab Your Trimmers Boys, It's Manscaping Time
Let's Get Digital
November (8)
5 Wedding Traditions We're Leaving At The Alter
Thanks But No Thanks
Unplug Your Wedding
Go Fund Yourself
Inviting Grams And Pops To Your Same-Sex Wedding
What To-Do Before Saying "I Do"
How To Stop A Wedding In 14 Steps
A PSA To The Grooms Of The World
October (18)
Splitsville, USA
Spotlight Proposal
Hogan Doesn't Know Best
Swap Your Bartender For A Bud-tender
Stripper? Hardly Know Her!
Be A Blasted Bride Or Rethink Your Ink?
Here Comes The Botox
The Newlywed Game
Baby Nazis
Married And Screwed - Literally
Bride·zil·la, Noun
Put A Ring On It! Just Not That One...Or That One
Keep Your Girls Warm This Winter (Yes, I'm talking about boobs)
From Open Bar To NOPE-en Bar
Thanks For Coming, Here's Your Bill
Mancessories
Dear Parental Units
When Celebs Do It Big
September (7)
A Ring Girl And A Flower Boy
From Miss To Mrs.
Love Is In The Air! And So Are My Allergies…
7 Excellent Ways To Beat The Post Honeymoon Blues
Newlywed Checklist: What To Do After You Get Married
I See London, I See France...
Forget The Gold Bands, We Want Bones!