Because who DOESN’T want to jump into the mud or the ocean in their $1,500 wedding gown?

We've already seen the jumping from cliffs into your destination weddings oceans, so we decided to ask a number of people to give us their most creative ideas on how to Trash-the-Dress. Majority of them incorporated paint - who would have thought. Here are their responses: 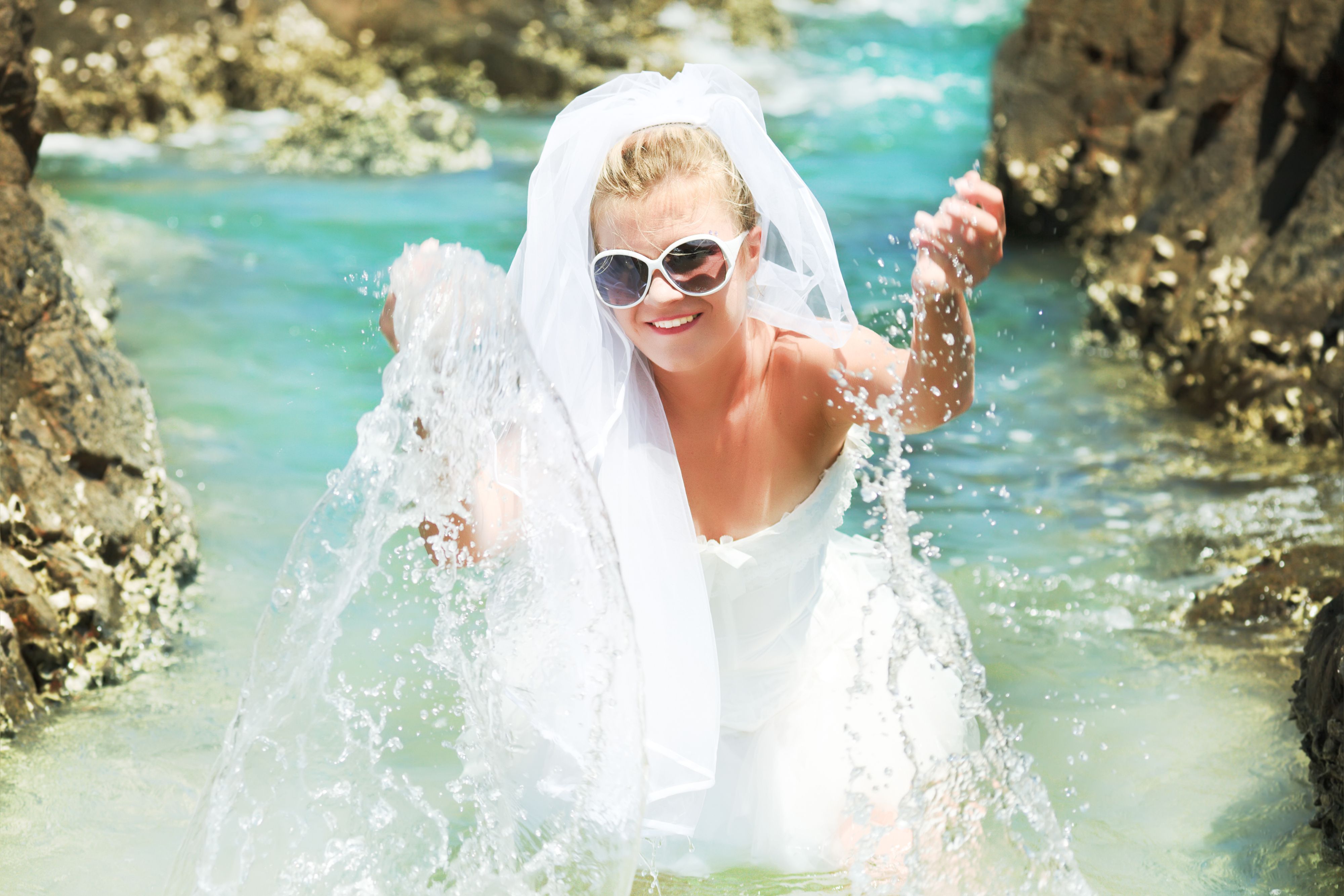 “I would totally set up a few flat pans of paint that matched the theme and decorations of my wedding, and then AFTER the reception, let all of my guests choose a color to dip their hand in and make their stamp on my dress!! They can decide whether or not they want to cut out their hand and take it home as a wedding favor! How cool would that be? I would save the breast area for later, my hubby can stamp those! :-)” - Janette D.

“My wife and I are already married, but if she ever wants to renew our vows and is down to trash her dress I’ll suggest going paintballing with all the groomsmen and bridesmaids - it'll be like combined post-bachelor/bachelorette party! The bridesmaid can change if they want!! I think Becka would actually love that!” - Brian S.

“What if the bride and groom bought a large blank canvas, and had a live graffiti or airbrush artist come and create something really unique and special for the two of them while making the bride PART of the work!? She can stand against the canvas and let him spray can her gown! Yes! That rocks! Would probably be a really cool wedding gift too!” - Matthew T.

“Why not just make your dress all sparkly! Like, first I guess let everyone throw paint on you or something that will act as an adhesive, and then jump in a tub of glitter or something! Spray it with hairspray after to preserve it :-D” - Danesha T.

“I’ve seen those events that have like powder paint, I think it’s called a color run. But that seems kind of cool! Just have your guests launch handfuls of powder paint at your gown as you and your hubby dash out the door for your honeymoon.” - DJ M.

“Burn it! Set fire to it… probably should take it off first, but it’d be pretty cool for a professional photographer to capture those images in some creative way.” - Maria R.

“I’m doing a mud run, in my tux… so when my girlfriend and I decide to get married she should probably be mentally prepared for that ahead of time. Actually, I should probably talk to her about it now, give her like a year before actually proposing to her to think about it.” - Derek B.

“We had our wedding on farm, and our reception was hosted in a barnyard - because we raise farm animals so it only felt right - So, we actually ended up trashing my dress on accident by snuggling in the hay with the farm animals for our wedding video and photos. And I’m talking dirty pigs, sheep, cows and horses. So there’s one idea” - Molly Sue W.

I thought a lot of these were really fun and colorful! So, if you're not concerned about the money, or planning on taking your dress back afetr the wedding (uh huh, we know some of you bargain bunnies are into that) - the hell with it! Why not make some memories that are worth the $1,500! I mean, it IS the only time you're ever going to wear it, so you may as well ruin it afterwards, throw a little glitter on it and then frame it, right?!

Brides & Grooms, tell us how you would want to trash the dress!
Leave a comment...
Search Blogs
Archive
2018 (15)
August (4)
What does my Maid of Honor Actually Do?
TOP 3 HONEYMOONS HOTSPOTS!
Band or DJ?
Bizarre International Traditions
July (5)
Do I HAVE to wear white?!
The Great Outdoors
Wedding Traditions & the Shocking History Behind Them
YOUR DAY YOUR WAY
Diffusing the In-Law Stigma!
June (3)
A Wineful Wedding Shower
Would you hire a psychic for a wedding or wedding shower?
It's feeling a lot like summer. Like the idea of Pool Party but don't like the EXTREME Pool Parties that aren't kid friendly?
May (2)
A White Wedding; with a touch of red & blue.
Achieving a Royal Wedding Dress
March (1)
When Your Fiancé Becomes Your Brother
2017 (17)
October (1)
What NOT to forget for your Big Wedding Night!
August (1)
Prepping An Autumn Affair
July (2)
Heartfelt Letters
Save a Few Bucks
June (2)
An Arctic Honeymoon
Slackin' on the RSVP
May (3)
Pippa, Please.
Are you the Superstitious Bride?
Cinco De Wedding
April (3)
It's been a Long Time 'Cumming'...
What Would Make You Call Off a Wedding?
Proposing One More Time
March (2)
Interracial Relationships
Favorite Proposals
February (1)
Cake and Wallpaper?
January (2)
Under-Bloomed; Over-Budget.
Saving the Date: or Rather, Picking One.
2016 (47)
October (5)
Disney Movie Love Reading
MASH Nostalgia
Color Coordination
When Friends Fall in Love
Halloween Inspired Wedding Gowns
September (1)
Brangelina Split!
August (5)
Funny Wedding Invitations
Weirder Weddings
Sheer Comes The Bride
Gluten-Free Alchy
Falling Out of Love?
July (8)
Our Top 5 Celebrity Wedding Dress Fails
Where would you like your Arses?
Now That's Some "Fly" Wedding Photography
How about Polyexclusivity?
Bridal Shoe Strategy!
The Engaged Rosie Huntington-Whiteley & Jason Statham
Cheers to That, Britain!
The Lover's Checklist
June (17)
NEWBIE ALERT: Welcome to the Wedding Videography Industry!
What type of husband are you?
Kim K. Rap Sheet
Advice for Anonymous
Why can't I find THE ONE?!
What Type of Wife are you?
Summer Wedding Favor Ideas
Wedding Planning with iMessage
Slaying a Twofer
Dapper Dan's Do's & Don'ts
Non-Traditional Wedding Cakes
Trash the Dress
Today's Celebrity Hair & Makeup Faves
Brides take to Bleaching & We're NOT talking about their Teeth.
Memoirs of Wedding Horror
"Briding" on a Budget
When Celebrities - I Do - it Humbly
May (4)
DRESSESSARY or Nah?
2016 Top 5 Wedding Themes
We're Just Ordinary People
Patiently Waiting
April (1)
5 Day-Of Wedding Disasters And How To Deal
March (2)
Dance With My Father Again
Let's Get Naked
February (1)
An Ode To The Spray Tan
January (3)
Different Strokes For Different Folks
The Year Of The Boho
Engagement Season Drinking Game
2015 (36)
December (3)
The Marriage Is Strong With This One
Grab Your Trimmers Boys, It's Manscaping Time
Let's Get Digital
November (8)
5 Wedding Traditions We're Leaving At The Alter
Thanks But No Thanks
Unplug Your Wedding
Go Fund Yourself
Inviting Grams And Pops To Your Same-Sex Wedding
What To-Do Before Saying "I Do"
How To Stop A Wedding In 14 Steps
A PSA To The Grooms Of The World
October (18)
Splitsville, USA
Spotlight Proposal
Hogan Doesn't Know Best
Swap Your Bartender For A Bud-tender
Stripper? Hardly Know Her!
Be A Blasted Bride Or Rethink Your Ink?
Here Comes The Botox
The Newlywed Game
Baby Nazis
Married And Screwed - Literally
Bride·zil·la, Noun
Put A Ring On It! Just Not That One...Or That One
Keep Your Girls Warm This Winter (Yes, I'm talking about boobs)
From Open Bar To NOPE-en Bar
Thanks For Coming, Here's Your Bill
Mancessories
Dear Parental Units
When Celebs Do It Big
September (7)
A Ring Girl And A Flower Boy
From Miss To Mrs.
Love Is In The Air! And So Are My Allergies…
7 Excellent Ways To Beat The Post Honeymoon Blues
Newlywed Checklist: What To Do After You Get Married
I See London, I See France...
Forget The Gold Bands, We Want Bones!